13 replies to this topic

They say you should never meet your heroes. For the most part thats true, Ive never been
more disappointed than after my first drive in a DeLorean DMC-12, childhood dreams of time
travel completely squashed. When I was eleven I picked out the colors for a friends
dads new NSX  red with a black top  and even though Ive never driven one, its been on
top of my supercar wish list ever since. So when the guys from 0-60 Magazine called and
said they wanted to fly me out to Infineon to drive not just any NSX, but the Spoon Honda
NSX-R GT, a tuned version of the rarest NSX ever made, I didnt hesitate.

Based on the second generation, 2002 NSX-R, the GT was created specifically to comply with
homologation regulations for Japanese Super GT racing. Those regulations stated any car that
wanted to compete in the series had to be based on a production car with at least
five examples. So Honda made five NSX-R GTs. Honda never stated what, if any, changes they
made to GT underneath its wild new bodywork.

We do know what enhancements Spoon made to one of those five cars. Starting with the NSX-R
GTs functional carbon fiber aero aids, flat undertray, non-functional snorkel
(there for homologation purposes only), complete absence of sound deadening, single pane
rear glass (the only thing separating you from the engine) and carbon/Kevlar Recaros, the
Japanese tuner added its own upgraded suspension and brakes as well as a giant turbocharger
and remapped ECU to boost the 24-valve 3.2-liter V6s from 290 to 420 HP.

This isnt just the car Ive always lusted after. Its the single rarest example of that
model and not a plain version of that either, but one thats had the bejesus tuned out of it.
Infineon is an intimidating place to drive any car, in place of run off, concrete walls are
installed right next to most of the track, restricting not only your options should something
go wrong, but, in a car as low as the NSX, your vision too. What parts of the track are
unencumbered by concrete feature huge elevation changes. Its my first time
here and Im having trouble remember which corners go right and which ones left. The track
is especially intimidating given the complete absence of driver aids in this priceless
one-of-a-kind car. Sure, theres ABS, but there isnt traction control stability control,
magnetic suspension or drive-by-wire anything.

Dating from 1990, the NSX hails from a completely different era of car design, one that put
emphasis on the fundamental rightness of a low curb weight, lower center-of-gravity, an
engine mounted amidships and the kind of subtle control thats only available in the
absence of electronic assistance. The GTs bodykit also adds down force, lots of it.

Turn six at Infineon is an impossibly fast, downhill, off camber, near 180-degree hairpin.
Its exit is bordered by a three-foot high, six-inch thick piece of poured concrete. Taking
it fast takes commitment and more than a little faith. Gripping the tiny Momo wheel with
white knuckles, it takes all my strength to turn the NSX onto a tighter line. The
downforce that kicks in at close to three-figure speeds combined with the huge amount of
caster means the steering gets heavier as you go faster, lots heavier. But thats just a
side effect to the reason for those two changes; with them, the NSX-R GT will make it
around any corner, at seemingly any speed, with an absolute absence of drama. As long as
you keep your right foot planted, just like the 911 before they made it a luxury car,
the mantra for any NSX-R GT driver needs to be Never Lift.

Oh, and there will be NSX-R GT drivers too. Even though this specific model will remain
very special, starting next year Spoon will sell you a brand new one that looks and goes
just like this for only $150,000. And yes, it will be road-legal and available in left hand
drive. Neither will they be mere replicas, but built using a supply of left over NSX-R
chassis Honda has squirreled away somewhere in Japan.

That money wont buy you a luxury car. While the original equipment carbon/Kevlar Recaros
are supportive and comfortable, the air-conditioning cold and the tape player functional,
the interior is cramped and difficult to access in a way expensive cars simply arent any
more. Its loud in here too; only a single pain of glass separates you from the grumbling
tuned engine and its big, popping exhaust. Dont think of it as Spartan, think of it as
purposeful. Decades old design has its benefits; the view out is unencumbered by hood,
fenders or power bulges, while the A-pillars are thin, enhancing your vision. The view
out of the NSX is unrivalled and uncompromised, allowing you to concentrate on doing
nothing but going fast.
And it does go fast too. Weighing just 2,795 Lbs (the 480 HP Nissan GT-R weighs over a
thousand pounds more), that 420 HP can propel it to 60 in less than four seconds and on to
a top speed somewhere in excess of 186 MPH. 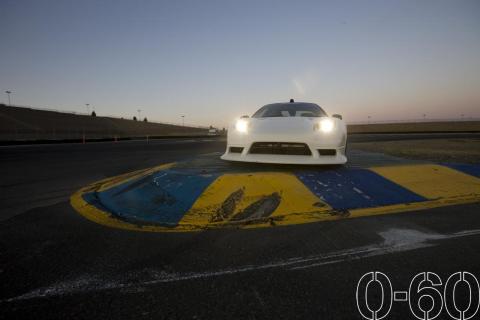 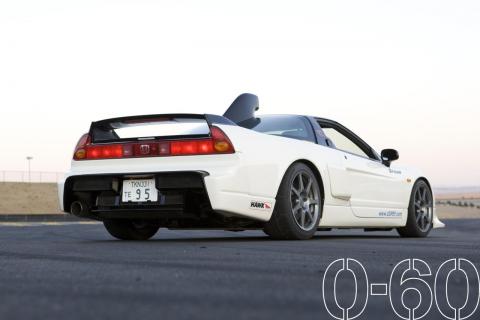 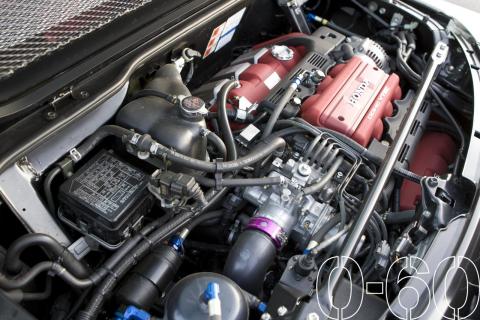 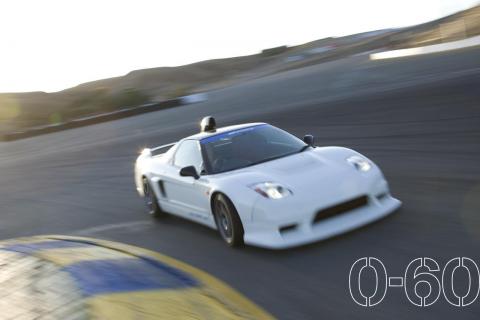 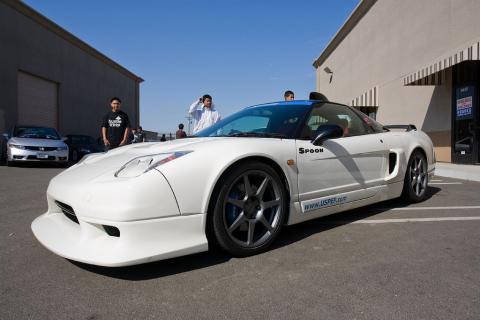 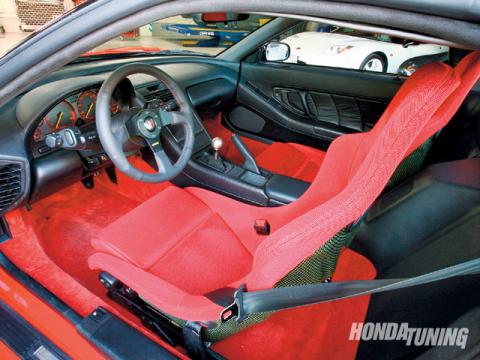 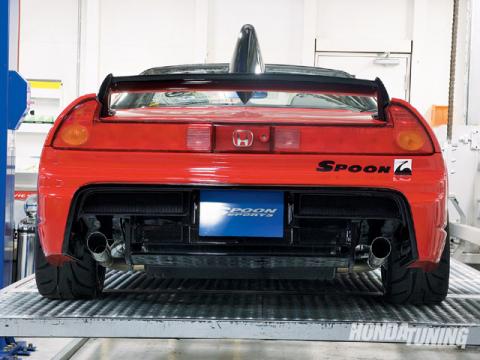 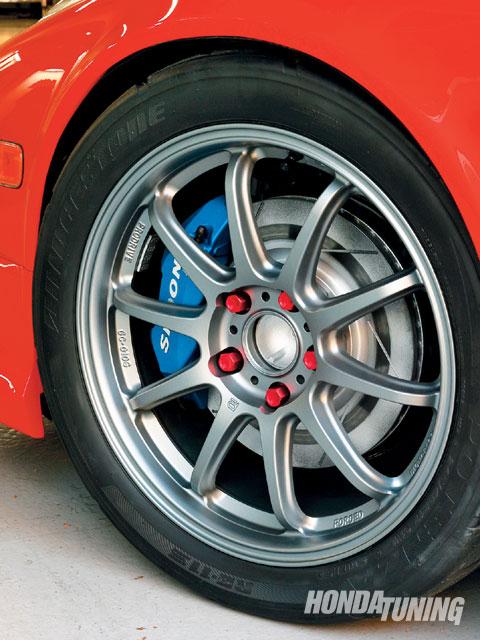 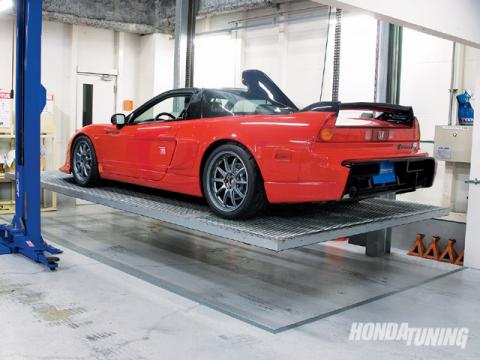 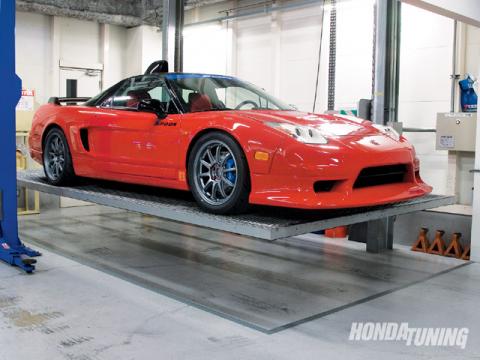 Spoon President Tatsuru Ichishima reveals all of the details on the first ever left hand drive Honda NSX Type R. Based on a USDM LHD Acura NSX, the Spoon team stripped the car down and built the car back up with precision according to Type R specs with additional go fast goodies from Spoon.
After the Spoon NSX-R GT made its debut on Road & Track 2008 November and GTChannel reported that Spoon was building a LHD NSX-R for the US market, Spoon was swamped with emails and phone calls asking about the details of this project. Now that the news is official and the car was on display at the Tokyo Auto Salon last week, we gave Ichi-san an opportunity to answer all of the questions which remained unanswered until now.
Spoon believes that the overall quality of the car is measured by the fine balance between lightness, durability and performance. All HondaType Rs have all of these attributes and this custom LHD NSX-R built by Spoon is no exception. As you can see in the video, lightness is a very important theme in Spoon's tuning philosophy and how they focused on weight reduction upon building this car. This NSX has NSX-R "GT"specs front bumper and not the stock JDM NSX-R bumper. The stock NSX bumper weighs 77Lbs, but this front bumper weighs only 33Lbs. You can also see that the front bumper's aerodynamic design is to produce more downforce on the front for better traction and handling. The head lights have been changed to the kouki fixed type to reduce a total of 22Lbs compared to the retractable type with the heavy motors. The stock aluminum hood was replaced to a carbon fiber hood shaving off 30% of weight.

If everything seems under control, you're not going fast enough

I´m so JDM  I everything eat with a Spoon 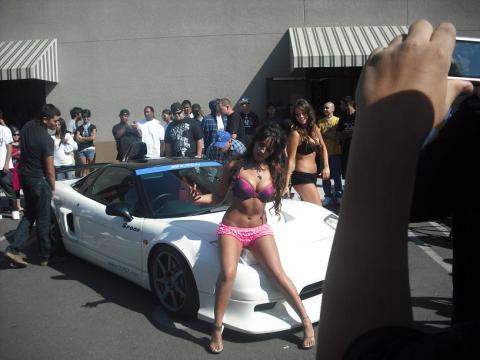 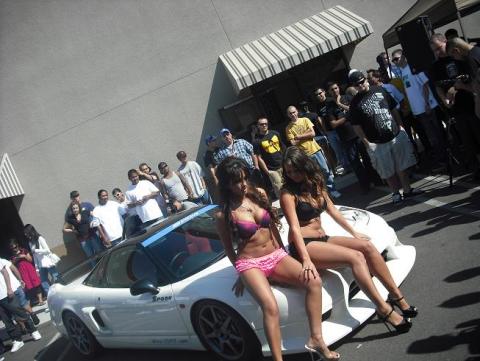 Over the 23 years Spoon Sports has been in business it has firmly established itself as one of the biggest names in Honda circles. With the simple motto that every 1/1000 of a second counts they have created their own tuning philosophy and applied it successfully to both road and race cars. Ichishima-san has always preferred to dedicate himself to the affordable spectrum of Honda production cars, almost ignoring one of Honda's greatest creations, the NSX. So you can imagine how excited everyone got back in 2008 when he came out of nowhere with the car you see here.
Built to celebrate Spoon's 20 years of race entries, Ichishima decided to go full out and build a special racing version of the NSX-R GT that he would, later on that year, enter in the Macau Grand Prix.
It's not every day you get the chance to take a look at such a rare car, so when Ichishima invited me to Motegi during one of the final test sessions before the car was due to be shipped out, I definitely didn't turn him down.
Applying Spoon's knowhow to the C32B can only give incredible results, and this particular build showed the just how extreme Spoon can really go if they want. So boosting power and response of the V6 is a fully balanced one-off stroker kit that lifts capacity to 3.5L. The heads are ported to increase airflow and boost response and fitted along with special Spoon camshafts. Once sealed along with the Spoon metal head gasket an 11.0:1 compression ratio was achieved.
While fully custom race headers and exhaust were created the intake side employes a Toda Racing injection kit made up of a six-throttle conversion and special blue-anodized velocity stacks. Yes the sound is insane! Ichishima says power is around the 400 HP range but seeing the car blast down the Motegi short course I'd guess that was a very conservative estimate.
The work that went on behind this build is nothing short of mind-boggling, it is a true race car in every sense of the word. The all-aluminum chassis was further stiffened and fitted with a custom cage before being painted in gray, a special color that Spoon uses on all their race cars. Simplicity rules inside with a Takata race harness equipped lightweight carbon-Kevlar race seat and the same Spoon steering wheel that is sold on the Spoon catalogue.
tock instrumentation is replaced with an LCD race display. If you recognize the orange character you will also be able to figure out who took care of creating the lightweight dry carbon...The stock 6-speeder is joined by a ton of Spoon parts like the clutch disc, lightweight flywheel, release bearing, clutch hose, special LSD and a 4.4 final.
A lot of effort went into shaving weight off (down to 980 kg!) so along with the doors the NSX-R also sports a carbon hood. The "GT" front...
A staggered set up is run with 9.5Jx17" SSR Type-C RS and 240/640R17 Advan slicks at the front, with the rear running 10JX18" rims and 250/660R18 rubber.
A set of Tein adjustable race dampers are used at each corner while unmistakable Spoon monobloc 4-pot calipers take care of braking.